by Theresa | Jan 12, 2023 | About Divination, Recent Posts, Strega and Italian-Americana 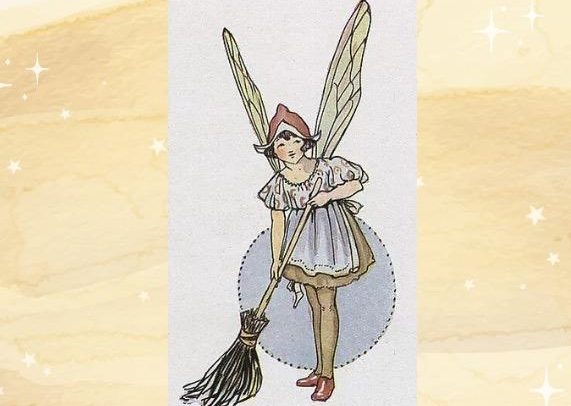 “You need a sweep!” Was one of the common pronouncements on my way to becoming a  stick diviner.

This meant one needed to have “dirt,” both psychic and physical, cleaned off of them.

Witches brooms of all sizes: hearth brooms used in utilitarian ways that seconded in spells and cures. Brooms used to to sweep energetic dirt out of rooms, corners and houses, and off thresholds. Thresholds, I had already been told, need extra special care.

I had even heard of brooms to put over keyholes to keep the bad witches out.

Besoms, the old word for brooms, usually made of twigs, are powerful tools for witches of the wild ways and shamans alike.

Only recently did I learn the name of the Italian sweeper fairy to call upon when engaging this magical tool and action. Her name is Deverra.

In his book, Ancient Roman Religion, H. J. Rose writes that in pre-Roman communities the time around birth was considered a very critical time for the mother and the baby. It was important to protect them from outside forces that may not be positive. Once born, the midwife placed the child on the earth to gather the potent life force called numina, then humans and  elemental beings with specific purpose were called in to do their very important jobs protecting the space.

Besides the goddess Cunina who looked after the child in the cradle:

“three people were set to work guarding the house all night against the uncanny things from the outside . . .  one of them chopped at the threshold . . . with an axe, one pounded it with a pestle, as if he were pounding corn on it, the third swept it with a besom. From these actions there sprang three minor deities, Intercidona, Pilumnus and Deverra, i.e., Cut-in-Two, Pounder and Sweeper”(42).

The humans called these beings in to help them as they carried out these tasks. Though Rose calls them “minor deities,” small goddesses and gods, I see them as elemental beings.

Deverra is a “sweeper fairy.”

Elemental beings are small, elf-like beings that  can be called upon to serve certain purposes at certain times. They are alive in another dimension and have long been friends and allies to humans. Though they have lives of their own independent of humans and our world, some of them decide to collaborate with humans in healing and creative or artistic work.

Deverra is latin for “sweep away.” This action, when fused with the intention of a witch of the wild ways or a human working in the realm of what we call folk-tradition, is overseen and augmented by Deverra.

Read more about witches of the wild ways in my post: The Goddess Diana, Lake Nemi and The Mirror of the Moon South of Rome.

Sweeping in a magical way is the domain of Deverra.

We can also make offerings to her in exchange for her help.

Though he refers to them as minor gods and goddesses, Rose also calls them “daimons”:

“Some features of early Roman cult reveal not so much a polytheism as a polydaimonism, the worship, that is, of an indefinite number of quite small figures, defined as regards their functions”(24).

Deverra is one of the daimons within this polydaimonism of pre-Roman people. I disagree with the word worship. It is more a collaboration and cooperation, a partnership.

I believe the people who inhabited the land now called Italy before the Romans including the witches of the wild ways were both polydaimonists and polytheists. Those of us practicing today are as well. There are Gods and Goddesses and there are daimons. They work together and in concert with humans who choose them or whom they choose to work with them. The ones who say yes.

Diana is a Goddess and Terminus is a God. Deverra, the Fata (fairies) and Lares (house elf) are daimons.

“But,” you may ask, “what is a daimon?” Daimons are elemental beings.

“an attendant power or spirit : genius. Usually daemon, mythology : a supernatural being whose nature is intermediate between that of a god and that of a human being.”

A supernatural being whose nature is intermediate between that of a god and that of a human being is aligned with the Dagara point of view that in divination the elemental beings, kontomble and wedeme, are mediating between the diviner and the spiritual forces who come to speak to the client. This is one of the hallmarks of Dagara stick and voice divination that I am initiated into. I place wedeme and kontomble firmly in the category of daimon.

This detailed articulation of daimons or elemental beings in the pre-Roman traditions has long astounded me. Deverra and her coworkers Intercidona, Pilumnus and Cunina, are examples as well as the Folletto who according to Raven Grimassi travel on the wind and create swirls and dust or the Linchetto— night elves who cause nightmares.

And just look at this amazing pantheon of Tuscan spirits of the grain. (The following is taken from Italian Witchcraft by Raven Grimassi, and Etruscan Roman Remains by Charles Leland)

The Bughin form the seeds. One must pray to bughin so that they will not rot the grains. A ritual was enacted to  ensure  one is on good terms with bughin.
The Palo is the energy spirit called in for the planting.
The Seia or Segetia guards the seeds in the earth.
Segesta protect the new plant sprout.
The Patana tends the plant as it grows.
Volutina forms the husk.
Deus nodotus aids in development of the nodes.
The Patelena opens the ear of grain.
The Patella prepares the grain for its first touch of sunlight and moonlight.

Once the grain is exposed, the spirits of the night in the form of fireflies come and impart their mystical powers to the grain
Talena, the sprit of the night, oversees this process.

When I first discovered this pantheon, I was moved by the delicacy and intimacy held in this knowledge of the discrete forces that grow a seed into a plant.

Witches of the wild ways and pre-Roman folk understood that these actions are forces that can be participated with.

There are forces in the universe of all sizes and scale. And it is these the witches of the wild ways collaborate with. Starting with numina as the general life force, then breaking it down into smaller articulated derivatives is genius.

Read more about numina in my post: Numina: the Spiritual Force at Work in Italian Witchcraft.

Polydaimonsim is numina expanded and elaborated upon, the understanding of the intricate variation in the kinds of forces that keep life going. For as all witches of the wild ways know, the work is about life, and the continuation of life, the life force and life systems.

It’s hard to learn and remember the names of all the daimons, but today we have easily learned one: Deverra.