May 5: Celebration of the Italian Snake Goddess Angitia — Theresa C. Dintino’s Abruzzo-Americana Wheel of the Year 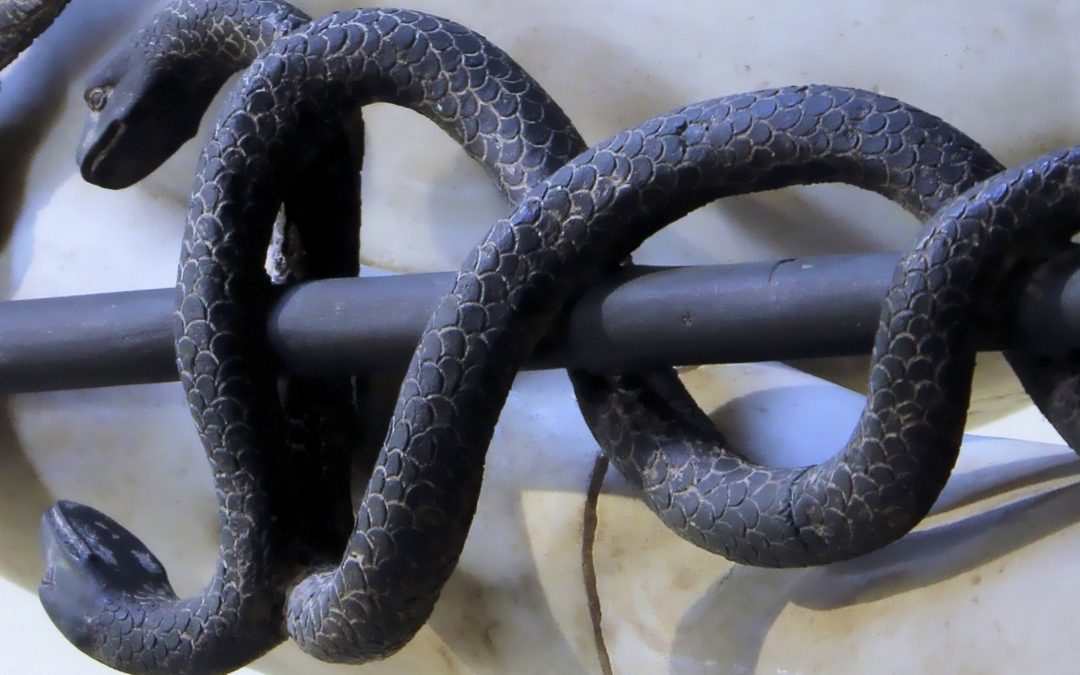 “On the first Thursday in May the most pagan of Christian festivals takes place in Cocullo (AQ) in honor of San Domenico Abate, whose statue is carried through the village covered with live snakes; the old snake rites connected to the goddess Angitia were passed on to the Christian healer who inhabited the area in the 11th century AD” (From Abruzzo 2000 calendar 2002)

Ritual: We will return this sacred rite to the Goddess Angitia, celebrating and welcoming her to tell us about herself in a drum journey. (Scroll to end of post for description of ritual.)

What is this?  Read about why I am creating an Abruzzo-Italiana Wheel of the year here.

Background Info: The Strega and the Snake
Delving deep into the longstanding relationship between witches and this cosmic force: The Snake Goddess

The Earth was born of the egg of the serpent. After the egg had formed within Her, She released it into the sky. The egg split open, releasing many more eggs, among them, earth, moon and sun. Snake roamed upon the earth, shedding her skin. From Her skin, people were formed. Since we are of snakeskin, Snake has much to teach us, one bite at a time. Snake is all-knowing. She planted trees. She filled the seas. She gave the earth beauty. She is our Mother, always beckoning us back into Her Egg, into the dark mysteries that are life.
~ Stories They Told Me by Theresa C. Dintino

The snake is the life force which sits at the root of most spiritual medicine traditions and is absolutely crucial to the Strega/Janarra lineage. It is this force that we call upon to carry out our work. It is to engage with and promote this force, the life force, that we engage in the work.

The purpose of spiritual medicine work is to promote life and all the forces of the universe that conspire to create and recreate it, which is often constellated into the image of a cosmic or underground force in the shape of a snake or serpent. 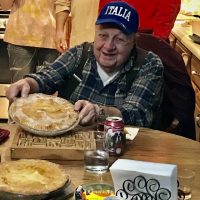 For this ritual I will prepare an Italian Savory Cheese Pie or fiadone di formaggio. These are classic pies made for Easter. My family (here is my Dad with two of them from this most recent easter)makes them like a whole pie but some make them in an empanada shape. Here is a recipe from SheLovesBiscotti.com that is close to the one from my family if you want to try.

After I wrote two novels about the Snake Goddess and Snake Priestess diviners in Minoan Crete, I visited my ancestral village in the Abruzzo region of Italy and found that the nearby village of Cocullo is famous for its snake charmers!

I had not considered a connection between the Minoans in the Bronze Age and the Italians in the 20th century, but here it was staring me in the face. I was aware that the Neolithic world of the Goddess existed in Italy and that Italian witchcraft and the Strega Tradition is a direct remnant of that. However, this direct snake worship connection, I found surprising.

In my novel Ode to Minoa, the Snake Goddess is a potent force that humans interact with. The priestesses engage in trance journeys brought on by controlled ingestion of snake venom. Through trance they gather prophetic information for the community. In Stories They Told Me, the sequel to Ode to Minoa, a different form of Serpent Power is accessed for purposes of teleportation, time travel and human “ascension.” 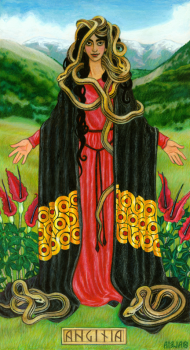 Angitia is the Oscan Snake Goddess of the Marsi people who lived in the Apennine Mountains in the Abruzzo over 2000 years ago. She is a Goddess of herbs, witchcraft and snake medicine. She is associated with Greek Medea and the ancient and powerful Gorgon (medusa).

While the Snake Goddess is a universal archetype, Angitia is local to the Abruzzo. There is even a town named after her. There was a temple to her on Lake Fucino near Aquila. In Roman times she was well known. The Abruzzo has a reputation for being a place of many magical people and where this kind of medicine was strong.

The Snake Ritual of Cocullo

The snake worshipping tradition, as it exists today in the village of Cocullo, in the Abruzzo region of Italy is one that honors a Catholic Saint. Most feast days for Saints cover up or reveal a more ancient custom. This one is derived from previous rituals to the Goddess Angitia. In Cocullo, San Domenico is believed to have the power to heal snakebites and bites from rabid dogs as well as toothaches.

In the spring when the snakes first appear from their caves, the snake catchers — as they are now called — gather them and keep them in wooden boxes until the first Thursday of May. On this feast day the statue of San Domenico is removed from the church and carried in procession through the town with snakes all over him. 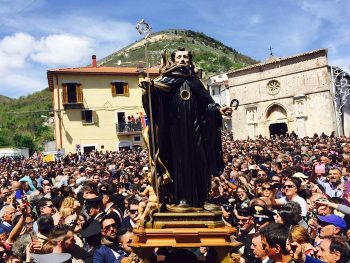 Many ‘snake catchers’ parade with snakes on their bodies as well. Currently the snakes used are non venomous and are returned to the wild after the ritual. Villagers and tourists can come for healing on this day: from illness, toothaches, or to ask for certain blessings. There is also the opportunity to gather consecrated soil from a cave behind San Domenico’s shrine. This potent earth has been blessed and is taken to homes for protective purposes.

In the books Ode to Minoa and Stories They Told Me, the snake temple customs were far more esoteric and integral to the culture than modern day rituals in Cocullo.

In the cosmology of those two novels, the Snake is the Creatrix of the universe. A woman skilled in snake medicine understands how to collaborate with the creative powers of the universe. The serpent power is life force. Having direct access to this energy and using it for the benefit of healing and community wellness is magic of the highest form. The Streghe carry this lineage forward.

Check out my pieces Being Diana: Goddess of the (Critically Endangered) Wild, The Paradigm of the Goddess is not the Patriarchy with a Woman on Top and What My Male Characters Have Taught Me. at medium.com

Participants are invited to bring:

For the drum journey:

Opening:
Call upon and welcome Fire

The Drum Journey:
What is a drum journey?
A Drum Journey is a time out of ordinary time to drop into a trance like state and be led on a journey that is therapeutic and restorative.  Drum journeys allow you to access delta wave lengths which are healing to the subtle body.  These are often also called “shamanic journeys” or “traveling”.
You will listen to the drum and be led into another dimension. The drum will lead you but it is your own personal psyche’s imagery that will participate in its own way.  Though the prompt and intention is the same for everyone, what you bring to it through what lives in your subconscious mind will make the journey unique for you.
As you relax, listen and follow the drum to where you are led, you will access parts of yourself that have been waiting for you.

Final procession to the fig tree, underneath which, onto the shrine created for Angitia, we make offerings to her of:
Vodka
Hibiscus Juice
Ash
Cracked raw egg
Flowers

We eat our meal as we share our experiences with Angitia with one another.