Lepinski Vir 5519 B.C.E. Eastern Serbia The Neolithic site of Lepinski Vir, 5899-4950 B.C.E., is located in Eastern Serbia on the banks of the Danube between the tall peaks of the Carpathian Mountains and the steep cliffs of the Korso Hills. Here the river is fierce and contains several whirlpools, the largest of which the site is named after. The isolation of the site allowed it to develop a most unique trapezoidal design. The dwellings were all triangles with slanted walls and flat, cut off tops. The floors of these houses were regular isosceles triangles each containing rectangular hearths and large, egg shaped boulders with circular recesses in the middle of them. These boulders were ‘natural’ sandstone sculptures found in the river. They have been determined to mark the center point of the original isosceles triangle. The entire settlement was built according to the same floor plan. All the houses faced the river with the larger ones placed toward the center. Also recovered were boulders that had been engraved with fishlike faces and breasts, others had etchings of vulvas—the sacred triangle of the Goddess. Sources: Srejovic, Dragoslav, Lepinski Vir: Europe’s first monumental sculpture, Stein and Day, N.Y., 1972 Gimbutas, Marija, The Civilization of the Goddess, HarperCollins, N.Y. 1991 Content goes here 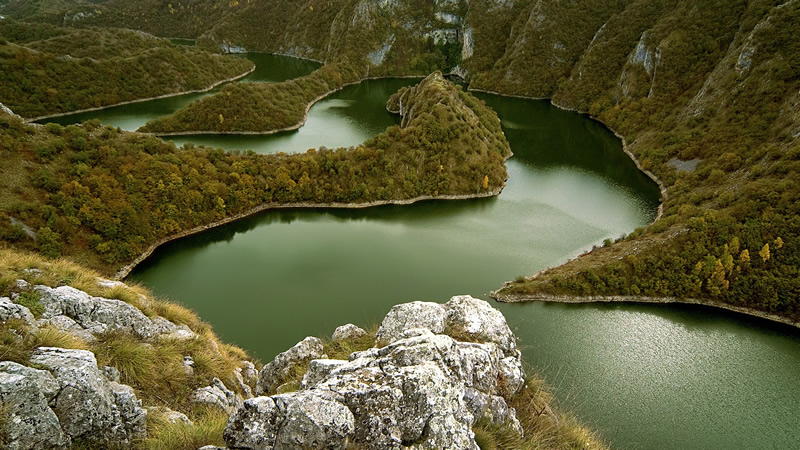 The river spreads wide in front and long to either side of me. The vir* swirls and whirls, Her underneath sound pulsing, calling. She has been calling me forever. Today I shall go to Her. Today I shall become fish.

Only the strongest are given

Only the best wish to go

These words Seoully spoke as she placed the crown of flowers upon my head solstice of last. Since then we have been preparing.

Diving. Over and over diving. In the cold walking, up hills and down, through forests of deep snow; my legs aching. In our triangle of a shelter sitting; sitting as triangle—legs crossed in triangle below me.

“Commune with Her,” Seoully said, sitting across from me. “Mother river must needs know you or the offering means nothing. She must meet your essence before she receives your body.”

I closed my eyes, heard Her strong pulsing below the frozen, covering ice. “Blup. Blup. Blup,” until I felt my ears would burst in the listening. I sat in the open doorway of my shelter at sun’s return. I spread my legs, exposing my wide, wet, triangle to Her. “Though your fingers are cold and ice, they pulse fire,” I said, leaning into her. She slowly unbuttoned my soul.

“Refrain from breath,” Seoully says suddenly, unexpectedly. “Hold it. Carry it within you until I tell you to release it.”

I stop. Stand still, the firewood heavy within my arms.

“Do not cease in your task,” Seoully reminds.

The firewood I carry from the pile outside the shelter to its place beside the large cavernous hearth. The breath swirls within me, my head floats upon its heat—the sound of my own loud pulse booming out toward my ears.

From my small, rounded mouth I blow slow bubbles into the frozen air. “Blup. Blup. Blup.”

They will find me later. On a hungry day in February, they will catch me; my flipping, scaly body filling their hopeful, empty net. Over the fire they will cook my juicy, white carp flesh. They will feast upon me. They will give thanks.

“Go to Her. Let Her taste you,” Seoully says, when spring comes and I am able to enter Her. “She must want you, long for you—be screaming for you—so that when She receives you, She is satisfied.”

Within Her I swim, my breath filling the spaces within me, deep down; spreading myself upon Her soft, sandy bottom, turning and swirling. Within Her sounds are not heard; movements felt. Peripheral vision takes precedence.

The sun streaming into Her from above shines light—illuminates. From Her base I travel toward this light until the sky shines blue behind the thick lens of water; white clouds swim by. With the emergence of my head comes the ‘pop’ into the sounds and smells—the feel of life in the above.

“Well done,” Seoully says, smiling down at me. She stands within the small waters at Her edges. Behind her smile is something other. I look away from it toward the shore where our shelters of many triangles stand, their faces opening toward us in rapture. The triangles on the outside of the settlement are smaller, growing larger toward center. I swim to Seoully. I wrap my arms around her knees. I pull her into the water.

We settled here to be near Her. This settlement hidden, secluded—impossible to arrive at and yet, here we are. Behind the settled shelters reach the tall, Carpathian mountains which take days to climb over; across from them a white, sparkling wall of rock, between these the engulfing river, full of circling virs and cascadings down.

If we do not give, She is forced to take; swallowing the fish She would have tossed our way. When She is forced to take, it is the weak She gets—of the weak taking more. By offering one, many are spared. Though sadness and loss permeate the community; fear and worry disperse themselves in the solstice dance.

From a far land to the south, Seoully came. From the land of strong sun—her thick thighs carrying her farther and farther—until she stood on the hills above the settlement listening.

To the screaming vir she said, ”Hush.”

She taught us new ways of fishing, led us to new herbs for healing and when the solstice of summer came, she stood upon the giving cliff, ready.

As the sun rose, lighting the front of her tall, black body, she dove straight—perfect—into Her still center.

We were on shore preparing for our solstice dance when it happened. There came a rumbling—from underneath a hurling—toward us. From our dance we turned toward the river out of which Seoully emerged flying. Through the air—cheeks puffed, round eyes bulging, gills pumping—she soared. We opened our arms. We received her within them.

The vir calls to you. She calls you by name. One moon, all through the moon, She called to me. “Lucinda. Luu—ciiiiin—daaa.” She pounded, Her muffled voice swallowing. I closed my ears to Her.

Later, her bottom fell out from under me while swimming, carrying my small, girl body hungrily toward Her center. My mother’s arms, long and reaching, lifted me back to the above. I clung to her neck. Around her center my legs I wrapped. Into her ear I said, through deep and desperate sobs, “Mother. Mother, the vir has spoken my name.”

After that I was given years and years and even more years, until the solstice of summer last when Seoully placed the crown upon my head and I was almost surprised.

It was after equinox that Seoully came to me, the fire burning high in front of as she pushed her fingers into my triangle, myself swelling like dough around them—swallowing, the whirlpools within me swirling—waters circling circling before coursing downstream into fierce trails upon my legs.

In the morning I washed myself within Her, offering Her the saltiness of my own juices. I—of earth now—my hands, still stained with the smell of Seoully, I presented to Her saying, “Now, I may become fish.”

When we are most satisfied; when the trees drip with fruit and the traps are always full; when the nets sink heavy with fish, we give to Her.

She shall swallow me head first—my self twirling in the air toward Her—arms behind my back, body straight.

We have been practicing, diving from the lower cliffs into waters without virs.

“Straighten your body. Straighten yourself,” Seouuly says, as my body bends at the center. The diving is very difficult. Seoully pushes me—over and over—she drives me, her frustration rising, until my legs fall from beneath me.

“You must be able to aim and reach Her,” she scolds. “You must present yourself to Her straight.”

“But why?” I say, exasperated, the water dripping off me in rapid beats. “Why must it be so?”

“So it will not hurt, darling,” she says, low, almost whispering. She turns and walks away from me, up to the hill, toward the diving cliffs.

I stand in the waters which surround me in blues and greens. I look up at the trees’ bright, wide open leaves, lightly blowing. The sun glimmers off the white wall of rock across from me. Everywhere, flowers are blooming.

Seoully performs a perfect dive. Her body stretches itself in long, straight projection—arms behind her back, legs extending up toward the sky. The water accepts her with one, large gulp. I close my eyes to the all over me shiver.

“I shall not do this again,” Seoully says to me. We are sitting up on the cliff that I shall dive off in the morning. The vir swirls—Her spiral visible, below us Her center moving. “The crown you shall pass to me tomorrow.”

I look at her. Her moist black eyes look back.

“She wants you so badly,” she says, touching her hand to my face. “She cries for you. Can you hear it?”

I take her hand into mine. I say, “I have tasted you and I have breathed you and you have taught me to dive. Because of you I may become fish.”

She moves close to me so that our breasts meet. She puts her arms around me. Holding my head firmly within her hands, she whispers into my ear, ”I have loved you. Now, I must lose you. Because of you I may become human.”

The sky spins blueness around us, swirling and twirling together upon this tall cliff of giving.

The dance of the solstice is a vir. As I circle within Her they will dance above—circling one foot around themselves, each becoming vir—creating within themselves vir, swallowing light into darkness.

I will miss the drumming and I will miss the dancing and as I enter the water it is this which I see: My people dancing the solstice of summer—each one a vir—and Seoully, the strongest among them, moving herself in whirling swirls, arms out, one leg steady, as the other stomps circles—preparing herself for next year.