The Goddess Diana, Lake Nemi and the Mirror of the Moon South of Rome

by Theresa | Dec 16, 2022 | Goddess, More on My Books, Recent Posts, Strega and Italian-Americana 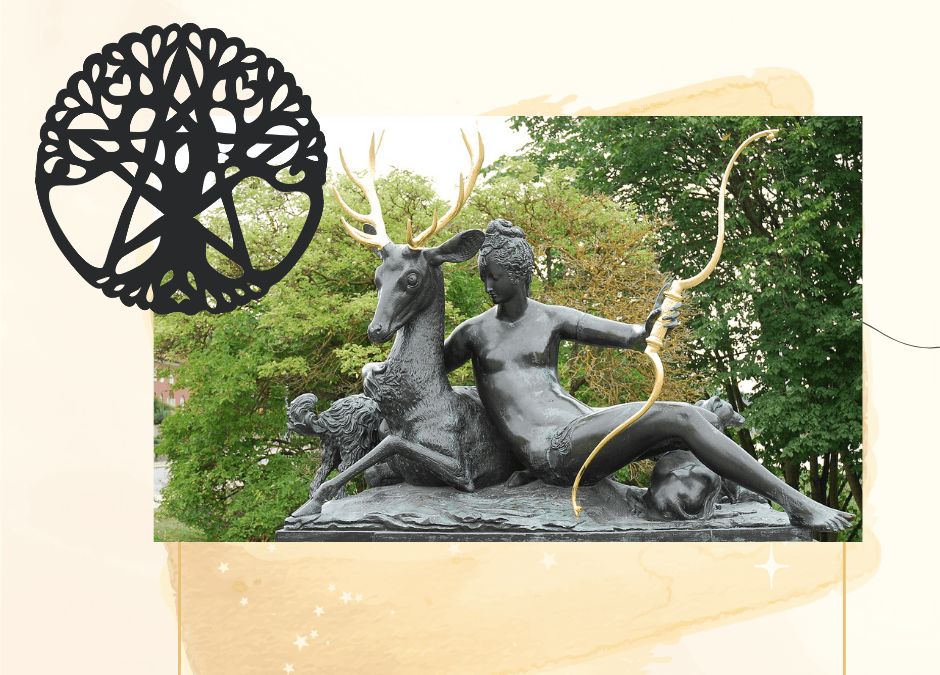 Italian Goddess Diana is often associated with Greek Artemis. The two are categorized as hunters and Amazons, implicating them as descendants of an ancient moon lineage.

Diana, however, was interacted with long before the Romans and way before her eventual association with Artemis. Diana has a herstory of her own.

In many of the cultures that preceded Rome, held within the traditions of the countryside, Diana was a powerful ally and non-anthropomorphized force. Her name arising from variations of the word divine, Diana was an ancient Goddess of the forest and wild places. Diana was also known by her oak trees and worshipped in sacred groves. Groups or individual witches, precursors to the Streghe—the Janarra—entered these sacred groves to commune with Diana, listen for guidance or set intentions for what they wished to call forth.

Diana was the actual container of the grove, held by the network of trees; the womb space in the forest, where wisdom lived and covens gathered. Within this womb-like container or membrane, by entering trance state, teachings from spirits and other dimensional realms were acquired, healings were achieved and ancestors were invited to speak.

Read a full post about numina here:
Numina: The Spiritual Forces at Work in Italian Witchcraft

The moon cycles were important in these rituals as well. The moon is the creatrix. Together with her partner, the sun, she creates time in the sky. The moon, because she reveals herself in the darkness also possesses the power of darkness, secrets and hidden dimension of life and time. The moon holds all the secrets. She holds the memories.

Working with wildness and Diana to increase numina in groves, lakes and mountains was the work of the witches of the wild ways.

As time progressed, the old ways became mixed with the Roman and Greek belief systems and Diana began to be represented by the image of a  human woman. She became  an ancient Amazon Warrior and hunter, carried a bow and arrow, was often depicted with her sacred dogs and was friend to the deer. Diana was a shapeshifter. She often showed up as a stag.

Before Roman time, Diana and the witches of the wild ways had a sacred mountain, grove and lake in what is now Nemi, south of Rome. Nemi is a town above the lake which is a crater lake. A lake in the crater of a volcano. The lake is called Lake Nemi as well as the Mirror of Diana or the Mirror of the Moon. At different phases of the moon and other potent times, women gathered at the grove or the lake to carry out sacred rituals. Offerings were made into the lake in these moon based rituals.

This is similar to the Icamiabas at the Lake of the Mirror of the Moon on the river Nhamundá in Brazil as covered in my previous blog post:
Icamiabas: Amazon Warrior Women in Precontact Americas

Scholars like to identify these rituals as “fertility rites” and many may have been so. In the ancient world, there was a need for more population. Infant mortality rates were extremely high as well as death of the mother in childbirth. It would have made sense that women approached the Goddess at certain times asking for help to conceive a child, and then protect them through pregnancy and birth.

However, we must beware the “brush off” that happens when we label all rituals women carry out secretly as “fertility rites.” Women carrying out rituals in only women contexts also engaged with esoteric intentions outside of the issue of reproduction. Whatever was happening at these Mirror of the Moon sites in South America and South of Rome was a ritual focused around the moon, and the water to make something happen. That something goes far beyond conception of a human child.

Were the ancient women carrying out the rituals at Lake Nemi also a form of Amazon women?  Were they engaged in resisting the encroaching patriarchy and invested in maintaining the matriarchal, matrifocal lineages of the moon? Diana has a strong association with the Amazons, she carries a bow and arrows.

It is possible that some of  the witches of the wild ways were also Amazons who broke off of the ancient matriarchal cultures to form bands of resistance like the Icamiabas in South America or the Amazon women around the area of the Black Sea.

Lake Nemi as a healing center

In the 8th century BC, this location South of Rome near Nemi, with the oak grove and the Mirror or the Moon was taken over by the Romans and turned into a healing center with temples to Diana and structured rites. Many of them were indeed fertility rites but others were for more general healing.

Archaeological digs have revealed temples, and clay votaries offered to the Goddess, many in the shape of body parts including clay images of the uterus. These votive offerings often represented the part of the body that needed healing, or that had received healing from a previous visit. If requests from a previous visit were achieved, the petitioner would return and leave the clay representatives of that healing as a gift to the Goddess.

Eventually there was even a room incorporated into the temple complex where one could acquire the votive offerings once they arrived at the temple for healing or to offer back in gratitude.

So it seems some of the original rites of the witches of the wild ways at Nemi were preserved: inviting the numina of the ancient moon Goddess Diana to come and assist or collaborate in intentional creation or healing though the sacred water.

These clay offerings to the sacred water of the lake of Mirror of the Moon south of Rome  resonate with the jade muiraquitãs found in the Mirror of the Moon on the Rio Nhamundá in the Amazon basin in Brazil. The muiraquitãs may have also been a type of votif offering left to the moon Goddess or a power object filled with numina given to the petitioner to take with them to continue the work initiated with in the ritual.

Diana’s temple center at Lake Nemi and its lake and grove gained notoriety from James Frazer’s 1890 book The Golden Bough which was drawing on an epic poem by Virgil (70-19 BCE), The Aeneid as well as other legends of rites carried out at Lake Nemi in the context of the Goddess Diana and her sacred oaks.

In The Aeneid, the hero Aeneus must enter the forest to locate a Golden Bough which he then presents to Prosperina, the Italian Goddess of the underworld. This assures his successful journey though the underworld to locate his dead father.

Other legends that Frazer covers about the Golden Bough tell of the sacred Grove of Diana at Nemi being guarded by a priest. The priest, required to be a former slave, gained his title by killing the previous priest of the grove. Once accomplished he earned the title: Rex Nemorensis (King of the grove). The Rex Nemorensis guarded the tree that possessed the Golden Bough. It was a title and honor that apparently many men wanted and fought to attain even though it meant eventual death. To guard the Grove of the Mirror of Diana must have been very important indeed.

It is frustrating to me that all of the information about the Grove and Mirror of Diana south of Rome gets hijacked by this part of the story. There is an obsession with this legend about the sacrificed priest even though we are not even sure it is simply the stuff of legend.

Very few fail to focus on what is really important: If the legends about Rex Nemorensis are true, then why were so many men willing to die and murder for it? What was happening at the lake and in the Grove of Diana at Nemi that needed this kind of protection?

Potent rituals need absolute secrecy and protection. Those who attend must be vetted for cleanness of intention for security of the portal. This may be one of the reasons why the lake of the Mirror of Diana required such a devoted guardian.

A ritual for Winter Solstice

We can safely deduce from all of this that there is something sacred about a contained body of water and the moon’s interaction with it after it has been tended to for some  time by medicine women or priestesses. The waters become activated and potent with numina just like groves, mountain and shines. These sacred waters, tempered and cured through repeated interactions become allies in the work as well. They become portals and doorways for more than human reproduction.

Perhaps the women were accessing hidden memories or creating termas (memories or information hidden in one lifetime to find in another), pulling energies, ancestors or other beings forward from other dimensional realms, birthing new ideas or participating in changes taking place at certain times on the earth.

Ancient women, Amazons, Icamiabas, witches of the wild, understood there are certain times on this planet where access to other dimensional realms becomes easier, more accessible. Many of these are the full moons, but also equinoxes and solstices. Winter Solstice is a time of birth. A portal is open.

Stay tuned for the next post in which a ritual is offered for Winter Solstice to manifest with the Goddess Diana and the Mirror of the Moon.