What is Minoan Crete? 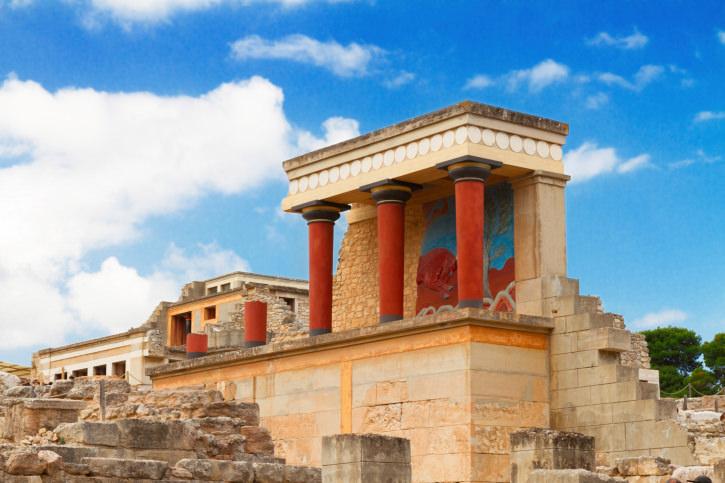 Crete in the Bronze Age was an island surrounded by a world of change.  In fact, the Minoan society was one of the last holdouts for the worship of an all encompassing universal life source envisioned in the form of the Goddess; one that had previously thrived throughout most of Europe and the Mediterranean.

The archeological finds uncovered by Arthur Evans at the beginning of the 20th Century from the “Minoan” Era are named after the legendary King Minos of Greek Mythology.  Evidence for a king, however, has yet to be found.  Instead, statuettes and images of Goddesses and priestesses abound. Most prominent are women in trance dressed in ritual attire, wearing tall hats, holding a snake in either hand. 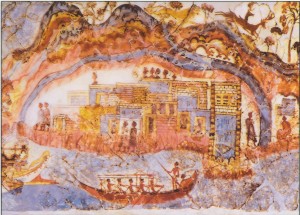 “Minoan” Crete had its origins as early as 6000 B.C.E., and evolved as a continuous society reaching its height of achievement in the Bronze Age (1700-1550 B.C.E.).  The island boasts several huge, sprawling buildings whose wings emanate outward from the open air, central court.  These great buildings referred to as “palaces” by most archaeologists and as the “Center” in my novels, Ode to Minoa and Stories They Told Me, contained workshops for various art forms. There were also temples to the many manifestations of the Goddess; snake, bee and butterfly, “cult” rooms containing ritual baths, “pillar crypts”- small square rooms with a single column surrounded by several libation holes – as well as large halls, great processional corridors and extravagant staircases.

The “Center” building in Knossos—the largest city on the island in the Bronze Age—covered over three acres, was at least three stories high and possessed central plumbing, including running water and flush toilets! One can still see the in-place terra cotta pipes.  This alone is stunning for its sophistication-a technology that was not seen again in the ancient world for well over 1000 years. 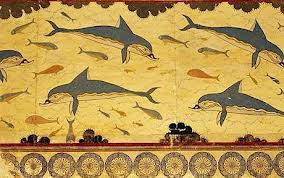 Great fallen frescoes were recovered, layers and layers of pottery with engraved or painted images of the natural world, including sea life, octopi, lilies, crocuses. The priestesses created sculptures of terra cotta and faience. The Minoans worked with exquisite minute detail in bronze and gold. The remains reveal a very sophisticated society possessing no intent of fortification and arsenal, rather a deep respect for nature and an all pervasive spirituality centered around a female deity.

Worship was not confined to temples.  Votive offerings were found in caves, in private homes, and mountain peak shrines. In grotto waters hundreds of finely crafted copper and gold double axes-the sacred labrys—have been recovered. 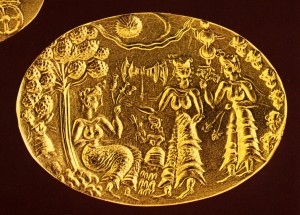 Eventually Minoan Crete was destroyed as well.  There is much debate and scholarship over what happened and who did it.  It seems more important to focus on what was lost.  For it is a deep sense of loss that arises when one encounters these marvelous images, these powerful females over and over again. Who were these women? What did they know that we have forgotten? What was life like in this bronze-age community? These are the questions I held in my heart as I wrote my two Crete novels.