Meeting the Goddess of Willendorf in Person

Venus Von Willendorf
Recently on a trip to Austria and Hungary, I was blessed to meet the Goddess of Willendorf in person. It was a very big surprise!

Many of you probably know who this is but you may not know her by her formal name. She is 25,000 years old, and was found in 1908 in a settlement along the Danube in Austria, a place now called Willendorf.  The archeologists who found her called her a “Venus” and then gifted her with the last name of the location. She is only 4 3/8 inches or 11.1 centimeters high.  She is made of limestone that is not local to the area. It is believed she was carried to this place on the Danube. Was she buried as an offering to the Danube herself? We’ll never know all the details but we do know for sure this little power packed sculpture has become the most iconic symbol of the feminist/Goddess/female empowerment movement. Blessed Be! 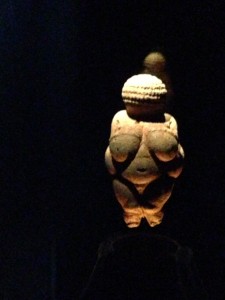 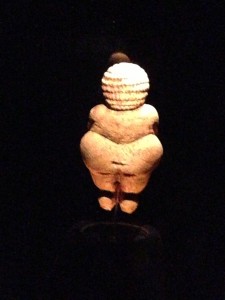 In a spontaneous diversion from our planned drive between Salzburg and Vienna, my travel companions and I decided on a longer, more scenic route along the Danube. I was very excited since I have been studying the Neolithic Goddess cultures that thrived along it for years. There are also vast mythological ties to this body of water.

As I looked at the map I saw that we were passing by a village on the Danube called “Willendorf.” I had always known that Willendorf, Austria is where this sculpture had been found but had not put that together with the trip plans. So here I was suddenly and unexpectedly driving by the place where this 25,000-year-old sculpture was unearthed. The tour book noted that the sculpture is now in The Museum of Natural History in Vienna.

The Danube is a very large river. Her liquid body is immense and thick with presence. The size of the boats that were traveling on her alone are revelatory of her girth. Huge tour boats the size of ocean liners are dwarfed by her breadth.

I started to wonder if it was the river herself that had been imaged or personified as this Goddess—the life-giving mother-Venus. I began to wonder about who sculpted her and why and what their relationship to this river had been. If she was carried here from an earlier culture, were they perhaps guided to this new location by this river Goddess herself? Did they see the same power imaged in this sculpture present in this river with her fertile banks and immense strength?

There is much evidence for a huge Diaspora of peoples who lived along the Black Sea after the floods of 5600 B.C.E. As they moved, they carried with them their icons and Goddesses and found many abundant places to settle upon the Danube.  These cultures thrived in peace along the Danube for hundreds, if not thousands, of years. She cared for them well. 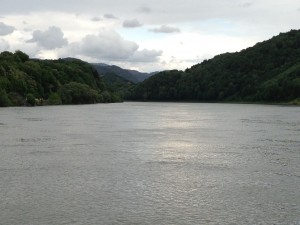 We pulled over and I made several offerings to this elemental force, this liquid power line of Europe.

The Danube starts in the Black Forest of Germany and ends at the Black Sea. After the Volga, it is the second longest river in Europe. The word Danube is possibly a generic word for river and it said on one website ‘possibly the name for a cosmic river as well. ‘ Some trace it to Danu—a Hindu Goddess.

The cosmic water gives rise to the fecund fertile river Goddess—the Willendorf Goddess—this Venus arising out of the waters. In any case the association between this Goddess and this river does not seem to be an accident.

In Vienna I went to The Museum of Natural History to meet Her. 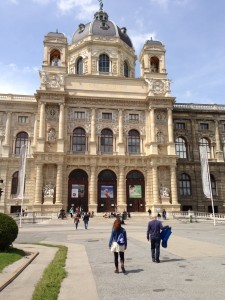 I was pleasantly surprised to see our Venus displayed with reverence and respect. Kudos to the Austrians or whomever put this exhibit together.

I was looking all over for her and then I saw a wooden structure in the middle of the room with gold lettering on it that said, ‘Venus Von Willendorf.’  They built her a temple! 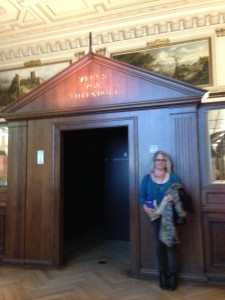 I walked in and was greeted with music from a bone flute from the time period. Then I saw her, in a glass case on a mountain type structure, with a red light shining on her. Perhaps the red light represents the red ochre she was found covered in. 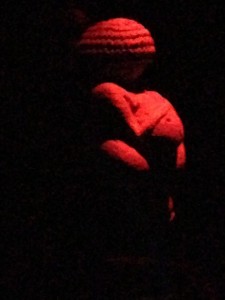 The room was completely dark save this case. Pressing a switch in the wall started the red light and flute music. Needless to say I hung out in there quite a while with her, awestruck. She is more exquisite than I expected –the workswomanship is incredible, the details so finely articulated, especially the “beehive” head. She is the perfect and powerful, primordial Mother goddess, fertile river valley, breadbasket to all—fecund female. Blessed be.