The Strega and Befana: The Italian Good Witch of Epiphany 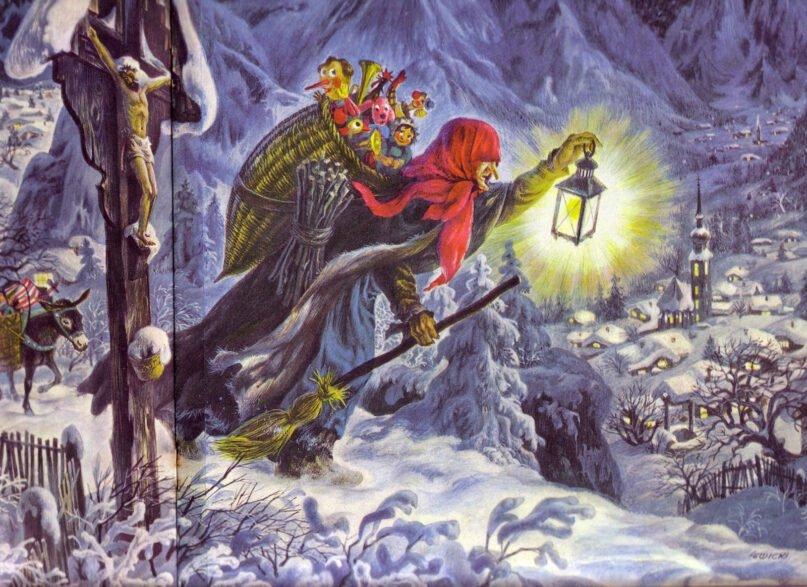 Growing up, my Italian Grandmother never considered Christmas to be over until we arrived at Epiphany on January 6, which she called “Little Christmas.” Because she was actively Catholic, she would pray in that tradition. But I remember Italian candies, tangerines and nuts coming out on that day and candles lit to the names of little elemental being friends to be remembered. Catholics see the Epiphany as the day that the Three Magi arrive to the baby Jesus and offer him gifts of frankincense, gold and myrrh. But in Italy, the celebration among the village folk is a celebration to and in honor of La Befana.

May La Befana be good to you this year.

Excerpt from The Strega and the Dreamer by Theresa C. Dintino

The landscape would not have been the same without the sheep, their pale bodies speckling the hills, as they made their transhumant journey back and forth, north to south, south to north, relentlessly grazing on the herbs, the sweet grasses, the soft blowing green life. The seasons of the Abruzzi could be read by the movements of the shepherds and their sheep. In the spring the lambs running, sometimes leaping, the shepherds in their colorful wool coats, the barking of their dogs, the smoke from their fires visible from the village.

When she was younger, Eva would go to them, sit with them, eat the food they, with their warm hospitality, always offered her. She listened to their stories, observed their colorful clothing and their sleeping quarters inside small, stone tholos, and considered becoming one of them.

The thought of sleeping out in those hills tempted her, the wild independence of it, the intimacy with the stars. In her older years, Eva would still encounter the shepherds when she was out foraging for her pharmacy. She would ask them if, in their travels, they had seen a specific herb or whether mushrooms had appeared on certain trees; ask them to keep their sheep out of particular areas until she completed harvesting an herb that was ripe there. She learned how to barter with the shepherds when they came into town selling their ricotta and pecorino and their raw, unspun wool. In her older years, however, she was sure she did not want to be one of them.

It seemed like only yesterday that they had come to the square with their bagpipes and their costumes, the bells on their ankles, as they did every year indicating the start of advent. The villagers had gathered around them, offered them food, clapped their hands, sung along. They danced together and celebrated the anticipation of the coming of the light. Now here it was time for Befana already. They had passed into the New Year only six days before, the New Year of 1893 in which Marcello had pledged to go to America. He had made his announcement, raised his glass of wine high in the town square on New Year’s Eve. His announcement had been met by raucous toasting and cheering to his new life by fellow villagers. They had all joined in song:

I bless Christopher Columbus
Who discovered the third part of the world He discovered three parts of the world,
And we Italians are called to work there And coffee is all over the land
Long live America and those who are there And America is long and wide and beautiful

It is all made of roses and flowers

And coffee is all over the land 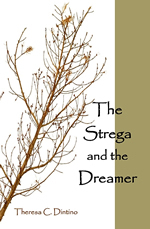 The children were excited for the festival. They had helped create the wooden Befana, and the float upon which she would make her way through the village on the shoulders of strong men. La Befana, a wooden effigy, sat legs forward on the float, her womb stuffed with mouth-watering treats; the magical, beneficent Befana to whom they would make their offerings and wishes. Befana, the good witch. At night, children would hang their woolen stockings by the hearth, and Befana would come. Keyholes would be left free of their customary garlic and no brooms would be set behind doors. The witch was welcome to enter on this night. If they were good little children, she would leave them biscotti, wooden flutes, toys, and knitted dolls. If their stockings were filled in the morning they knew their new year had been blessed.

As the parade wound its way through town, the procession sang holiday songs outside the more elegant homes and palaces. Their voices rose louder, their instruments more persistent, until the occupants of these fine homes acknowledged and received them. In return for their songs, the children were given sweet goodies and the adults were awarded small shots of brandy. After traveling the streets of the town, the procession continued to the top of the hill, laughing and singing.

Eva lagged behind, weary. Befana came at the end of a very long holiday season beginning December 8th. In her hand, she carried an olive branch. She had a question for Befana and her divining fire. She had a wish. Though she would do nothing to interfere with Marcello’s plans, plans which he was clearly in love with, a feeling of dread yet nagged at her.

She would ask the old soothsaying crone Befana to put her mind at ease. Perhaps she, the bringer of new beginnings, the one who releases the old to allow for the new, would assist her. Perhaps Befana would help her prepare to say goodbye to her husband, help her prepare for the possibility of her own impending exit when he called for her to come. The sound of the festa filled the atmosphere. She could see Befana fires already burning on tall hills in neighboring villages. Darkness was approaching.

Once they reached the summit, the crowd gathered around the Befana, admiring her cloth dress made from tattered rags, her wooden face surrounded by a cloth handkerchief, holding back hair made of dried corn husks. One of the elder women put her hands between La Befana’s legs to the cheers and hooting of the crowd. She reached in to her fertile, full womb and pulled out handfuls of chestnuts, apples and dried figs, then to louder cheering and hooting, the coveted Befana sweetbreads, a small amount this year to be spread sparsely among all. When she was well emptied, they thanked her with offerings and gifts; the usual display of braided wheat breads were this year only cloth effigies of bread. There were also miniature Befanas to offer, paper and wooden stars and moons, garlands of sage, barley, ivy, and rosemary. As they presented these to the Befana, wrapping her in layers of garland, they made wishes for the coming year. Then firewood was stacked under her, deep within her, so that when lit the Befana exploded into tall, leaping, energetic flames. All sang:

The Befana comes by night
With her shoes all broken
With a dress in Roman style
Up, up with the Befana!
She brings ashes and coal
To bad, nasty children
To the nice, good children
She brings candies and many gifts.

The children’s eyes grew wide as they watched the large fire consume La Befana, wondering if she would visit them later and deem them “good.”

Now was the time for divination. Eva walked toward the fire with her olive branch extended. She wasn’t sure what she wanted to know. Aware she needed a yes or no question, she began to formulate one in her mind. Would it go well, this move, this journey to America that Marcello wanted to make? She presented it less as a question, more as wish. “Please let it go well,” she whispered as she placed the olive branch on the burning fire. Never before had a “no” been received so quickly, for that olive branch erupted immediately into flames and burned up as fast as a piece of newspaper. Everyone knew that a slow burn meant “yes.”

Eva dropped her head in shame and embarrassment. She knew the whole village could guess her wish and thus see her rudely rejected by La Befana. “Why?” she asked. “Why?” she repeated, looking up at the burning goddess. “Why?”

Then Marcello was there, wrapping his arms around her from behind, saying, “Eva, you must stop with these silly superstitions. Everything is going to be fine. You will see. I promise.”

That night up on the hill, the fire burning bright behind them, the village danced the Saltarell together. When Marcello pulled Eva in for their turn in the center of the circle, he held her close and said, “Eva, I don’t know how I will ever leave you, but I must go.”

She felt his weakness then. Within her arms she held his fear and dread. It was there behind the promises and pledges, the bold and boisterous talk. She understood then, if she told him not to, he would not go.

She pulled him in close, his warm body shutting out the rest of the world. “Marcello,” she said, looking into his worried, desperate eyes, “I know that you must go. I will find a way to get through this.”

His body breathed relief, his eyes filled with water. Eva took his face into her hands and kissed him. For the first time in a very long time, and for the last time ever, Eva flaunted her passion, her love for this man, his love for her, their happiness together, in front of the whole village. She kissed Marcello with more ferocity and passion than she ever had and he held tight to her, far beyond the time in which their turn was up. The circular music held them as their fellow villagers circled in their dance around them. They left them alone. Everyone knew a goodbye when they saw one.