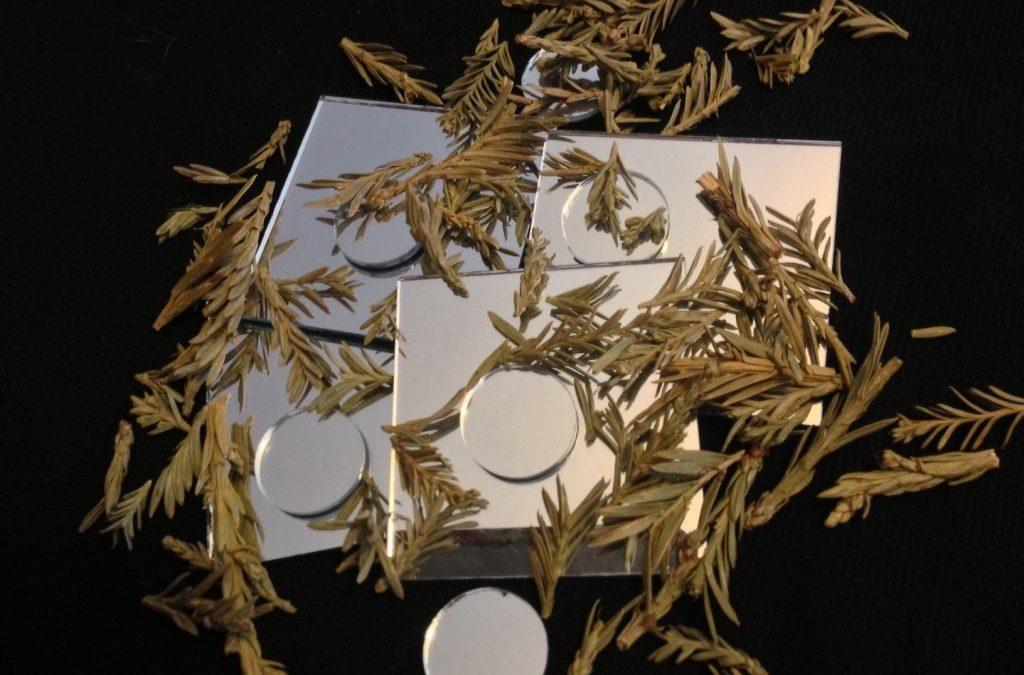 This Post is an Excerpt from my book: The Amazon Pattern.

For a number of years, I was in a women’s spiritual group who met to do Earth based rituals in Northern California once a month. For reasons that were not completely clear to any of us, we called ourselves The Cosmic Boatwomen.

One day we set out to find and interact with a particular tree. We had been told through a divination that this tree wished to gift us with a song. The prescription was to make hats, find this tree and listen for the song. The four of us made our hats alone between meetings, presented them to each other in the morning, then, carrying our hats, headed up to the tree.

The tree was an old growth redwood in a grove of “daughter” trees . This ancient tree survived because its bark had a twisted formation that made the loggers believe it was not worth cutting. She was not of any value to them. This tree remained while her sibling trees were cut down.

Redwood trees are the tallest, and some of them, the most ancient trees on the planet. They are also endangered, less than 4% of them remaining. Here, in the San Francisco Bay Area where I live, redwood trees are beloved.

We were excited that morning, the four Cosmic Boatwomen, as we presented our hats for each other to see. Each hat was a completely different design created from our own imaginations and abilities. Empowered and strong, we headed up the hill in delight and excitement. We were convinced the tree would be happy to meet us, that she would instantly recognize us as Tree Priestesses and gift us with the song.

In contrast to this enthusiasm, the walk up toward the tree was eerie. The forest felt dark and creepy. I was overwhelmed by feelings of foreboding and weird Wizard of Oz type warnings. I was convinced the other trees would throw apples at us for sure, had they been apple trees. We finally arrived at the Mother tree. She was huge, her presence immense. Her ghostly grey bark was indeed thick, twisted braids.

She was so large, she had sprung other trees from herself. Her “babies” grew off her trunk. High above us, entire new trees stretched out of her and continued growing into the sky. The duff around her was thick and spongy under foot. She was hidden, almost invisible, behind tall undergrowth.

As we sat to discuss how to proceed, ticks paraded wildly all over us. I had never seen so many ticks in one place at one time. In truth, we were getting a really bad vibe off this tree. There was an impenetrable force field around her. In spite of this, we donned our hats and sat around her in silence with the intention to listen.

I went around to the back of the tree and sat on a large burl that looked like a throne. My hat was a gold crown with mirrors on it. I sat by the tree listening for quite a long while, the mirrors on my crown twinkling happily as sunlight filtered through the branches. I decided to ask her for the song, the reason we had come.

“I don’t like you,” the tree said, upon hearing my request.

“What?” I was shocked. I had been interacting with trees for a few years now. Never had a tree said this to me.

“I don’t like you. You disgust me,” the tree continued.

“My pattern?” I shook my head, trying to understand. This tree was so blunt and direct. I had never met such a tree. Then I understood something: to a tree I am simply an energetic pattern. All this time I was talking to trees and naively assuming when they spoke back to me they saw me as I see me, as beings with eyes see me. I understood then how silly this was. Trees do not have eyes. Trees have other ways of seeing. A tree cannot “see” me but it can sense my pattern. Every human walks around with an energetic pattern that is normally invisible to other humans but the plant world “sees” it. Most likely animals and other beings we consider to be “mute” see/sense it as well. The tree did not liked the pattern she sensed in me.

“Amazons?” I said. “What is the Amazon Pattern?”

“Amazons would never have allowed deforestation,” she said.

This statement sliced through my body. It was true. What was I doing in my daily life to stop deforestation? I felt so defeated over this issue. I did not know how to stop it. I had given up. I understood then what she saw in my pattern. She saw all the places where I was weak, where I was accepting behaviors that were unacceptable.

Then, as if my life were passing before my eyes, the tree showed me, in fast moving images, all the places where I was still owned by the current paradigm. Though a feminist and activist for decades, there remained many places where I did not have my voice, my power; places where I lied to myself. I saw this pattern that the tree did not like in my daily actions, activities and beliefs. If I tried to write out all she showed me, it would take days. These were images that were holographic–deeply packed layers about me. The tree showed me to me. It truly was a despicable pattern. I didn’t like it either.

“Please,” I said, “show me the pattern you want me to be. I want to be a pattern the trees like. Show me the Amazon Pattern.”

Next, I received a series of visions of the Amazons in the context of the forests they lived in. I saw indigenous women singing to a tree. I saw and felt the presence of women connected and in complete communication with the trees and each other. I saw strong, powerful women defending, fighting for and willing to die for the trees. I had never met women like these.  I saw and felt the difference between the Amazons and me. That difference was unacceptable to me.

Then the tree showed me these Amazon women accessing other dimensions through a lens like portal in the tree. At the time I had no idea what any of this meant.

Nevertheless, I found myself saying, “I want to become a pattern the trees like. Please teach me the Amazon Pattern.”

And so, with this tree as my mentor, I set out to try to understand the Amazon Pattern and I prayed to become it for the sake of the trees.